i can't believe they stop and stare
and point their fingers doubting me
their disbelief surpresses them
but they're not blind, it's just that they don't see 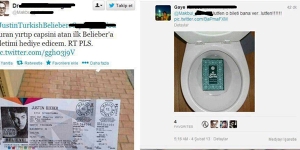