"oh, there was a wilson style "treaty" that was supposed to give the kurds a country--the treaty of sevres in 1920--but you can't give people a country. they either luck into one or they carve it out with a knife. ataturk rejected the treaty and told the kurds, "how about we just fight ya for it?" the new army, now the turkish army, fought kurdish guerrillas all through the 1920s and beat them--and again, it wasn't because the kurds can't fight, but because they couldn't unite and the turks could. ıf you had ataturk sitting back at hq you'd follow orders, too. you better boy. the kurds followed their nomad tribal bosses and got cut to pieces, real bravely.

and then, after the slaughter, comes the comedy. that's what ı love about modern war: how the language crap always follows the carnage. see, ataturk's new country had to follow wilson's line that a country means a bunch of people from the same tribe, preferably talking the same lingo. the ottomans never even heard of that idea, and the turks didn't really get it either; all they knew is that they had taken their country back from pretty much the whole damn world and weren't going to give any of it back, not an inch, period.

ataturk was a smart guy; he knew you had to deal with the anglos' crap about "the rights of small nations" if you were going to do business in the 20th-century world. so he or his propaganda ministry came up with this hilarious revisionist history where the kurds were actually "mountain turks." meaning, hillbillies, but from the same tribe as the main branch of the turks, just kinda backward, needing a little help from ıstanbul. you know: "never mind, meeester president weeeelson, these so-kall-ed koords, they eez joost poor mountain turks, we help them, they our brothers"--and then the effendi shuts the door on some league of nations dweeb"
bu başlıktaki 8 giriyi daha gör
belki ilginizi çeker 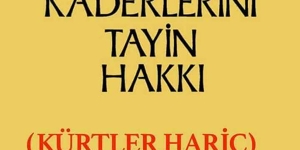